Book Magic: A Fairy Tale for Reading and Writing Teachers 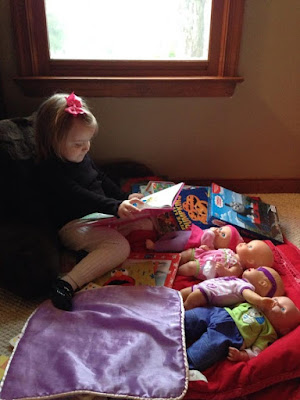 Long ago in far away land, there was a young maiden named Lucinda who toiled night and day.  She washed dishes, scrubbed floors, and cared for her siblings.  She wanted more than anything to leave her village for a distant land where she had heard there were wise people who could teach her about the world.  Her parents would not agree for her to go and said that she must stay at home and help them.  It was her duty to do so.  Her father was a poor woodcutter.  He made his living from the forest.  Her mother took in laundry to make money from the wealthiest people in the village.

Her parents told her that girls had no need of education.  There was much to do. It was not possible to allow her to leave home for such a frivolous reason.

One day in the village square, she met a young man who said he was going to that far away land to make his fortune.  One night while everyone slept, Lucinda crept into the darkness and met the young man.  Together they stole away into the night and walked miles and miles until they reached the land where they could start a new life.

Lucinda got a job working for the wise men at the University.  They spent their days and nights reading and learning.  They explored all the knowledge that the world had to offer.  Although Lucinda was scrubbing, cooking, and sewing for them.  She was curious and asked many questions.   Soon they came to love her passion for learning.  They began to teach her.  She absorbed their lessons one by one.  They discovered that her real talent was in teaching their lessons to others in ways they could understand.  Some say she taught them in a magical way that made learning fun, and it once she taught them a lesson, they were not likely to forget.

Word reached the King that this young woman had special teaching talents.  Perhaps she even had magical powers.  The King invited her to visit the royal palace where he made her an offer.  She would be the perfect governess for the royal family.  He would give her a handsome salary, and she would live in the castle.  She would have all that she needed to teach the royal children.

But Lucinda told the King she would do this only on one condition.  He would have to allow her to teach all the children of the land.

“But how will you do that?” asked the King.  “You cannot be everywhere at once.”

Lucinda said, “It’s magic.  I will train others to go forth and spread the love of learning throughout the land.”

And she did.  One by one she spread her magic methods for teaching children to read and to write, to question and to learn.  And those teachers who learned from her taught many children who grew to be passionate about learning as well.   Soon all the children who lived in the land were not just literate people, but thinkers as well.  And they were teaching their parents.

One day the King brought Lucinda into the royal hall to question her.
“Lucinda,” he began, “I am so pleased with the progress you have made with the children.  But I just have to ask you, what is your magic?”

The King was shocked.  “You allow them to choose?  You allow them to talk about the books and write about them?  Play with words?  How do you know that they are really reading the books?  Maybe they are cheating!  Are you teaching our children to cheat?!”

Lucinda stared at the King in disbelief.  Then she realized that he was the one person in the land whom she had not taught.  He had not been exposed to her magic.

“If you please, your Majesty, I would like to explain.”

The King was baffled.  “And all this talking and writing?  That helps them learn….?  That is your magic? ”

Lucinda smiled, it seems that the King was catching on.  He was learning.

“One thing more, your majesty,” Lucinda began, “I read and write with them.”

The King was perplexed.  “But shouldn’t you be making sure they are reading?  And writing?”

“Modeling behavior we want to encourage is a very wise decision, your majesty.”

The King smiled.  “What else can I do?  Is there anything else you need?  I think I like your magic.”

Lucinda shared her ideas with the King for making the entire country a better place.  Soon books were abundant and available to all.  The King set aside a time every day for all his loyal subjects to stop what they were doing and read.  Paper and writing instruments were provided to all citizens.  The entire country was reading and writing.

All because of Lucinda and her magic methods.